Peggy Fleming has been making collectable teddy bears and other soft sculpture for over 35 years. After a busy career that took her all over the country and her creations all over the world, she worked full-time in the communications field, reducing her artistic endeavors to hobbyist status. Since her retirement from her day job on March 31, 2021, she is taking up her needle again. A few years ago, Peggy formed a cooperative partnership with fellow artists Joel Hoy and Terri Larson called Once Upon a Needle.

Peggy Fleming grew up on Pleasant Ridge Farm in southwest Iowa, a home built by her great-grandparents.   Her artistic bent and love of animals were nurtured there.  She literally learned to sew at her mother's knee, playing in the button box and sewing together scraps of fabric while her mother was busy at her sewing machine making nearly every piece of clothing they wore.  The only toy patterns Peggy had access to as a child were the ones printed in her mother's magazines.  She remembers kneeling on the hard wood floor laboriously drawing out the grid and enlarging the patterns.  Thus began her education in flat pattern drafting.

Peggy had lots of pets as a child, including a pig named Julie that walked on a leash and a red calf named Fireball.  She has fond memories of her father bringing in a box full of baby animals for her to see when she was little.  Sometimes it was a litter of newborn pigs that needed warming on the radiator or maybe a nest of baby raccoons that had been orphaned.  She will never forget one snowy twilight when she witnessed foxes dancing in the meadow near the house.

In the summertime, her favorite hideaway was inside an ancient lilac bush.  It made a good shady place to daydream, read, draw or just escape from the piano teacher!

Peggy has a bachelors degree in Journalism from Drake University in Des Moines, Iowa and has experience in communications for the insurance and financial services industries. In her spare time, she has done theatrical costuming as well as other backstage work for local community theater groups.

In the early 80's, Peggy saw her first artist-made miniature teddy bear and wanted it badly, but her husband looked at the price tag and said "You can make this."  So she did.  Her first tiny bears appeared in an exhibit of women's artwork and people wanted to buy them.  She had no idea what to charge, so she started out at $15.00 each!  After a little research, she raised her prices.  Finally, when her last child was out of diapers, she decided to dive into the strange and wonderful world of the full time bearmaker by exhibiting at the Kansas City Teddy Bear Jubilee and ABC Schaumburg shows.

Peggy Fleming is a member and officer of the Iowa Teddy Bear Makers' Guild, a juried group of teddy bear artists living in the state of Iowa, USA.  Her pieces are represented in the collection at the Heartland Teddy Bear Museum in Clarion, Iowa.

In 1997, she was proud to receive a TOBY award for her miniature mohair polar bear, Klondike.  A version of this design was licensed to Bear Essentials, a division of Effanbee Dolls.  Peggy designed for Effanbee for six years until it was sold in 2002. 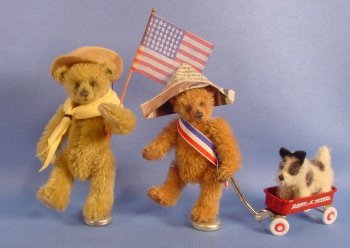 In 2001, Peggy was among only 38 artists who were invited to exhibit at the Smithsonian Institute in Washington, DC for their Centennial Celebration of the Teddy Bear.

Today, Peggy lives in the city with her husband in a beautiful wooded area full of wildlife near the Raccoon River with their West Highland White Terriers and 2 cats.  You never know what you will see when you look out of the family room windows...a group of deer, birds, squirrels, a passing fox, or a curious raccoon on the deck peeking in to see what the humans are up to!

Peggy enjoyed working as the social media director at a local bank and still considers herself a social media professional. She is currently immediate past president and treasurer of the Greater Des Moines Chapter of the Association for Women in Communications and also serves on the national board of directors for the Association for Women in Communications and is a member of Social Media Club of Des Moines.

Still trying to figure out what her retirement is going to look like, Peggy is making some bears and friends and some needle felted pieces. You might find her work on online shows or at the Handmade Art from the Heart Show in the Milwaukee area.

©2021 Peggy Fleming. Web design and content by Peggy Fleming, all rights reserved. No reproduction of this site or its content is allowed without express permission of the author.